The Women’s Group at the Saffron Festival

Home > Uncategorised > The Women’s Group at the Saffron Festival

Our women’s group was established to provide a welcoming, non-judgemental space where the mothers of children in our projects can come together to share some of the challenges they face in their daily lives and to collaboratively find solutions. The group, though supported by a social worker, is participatory, with the women choosing topics and activities and taking responsibility for organising each session.

Lalla Zayna and Lalla Zahra are two of the mothers from the women’s group and have been part of Centre Amane since its creation. Lalla Zayna has been a major motivator and leader in helping some of the families in the community and at the center. She also looks after the international volunteers during their placement in Taroudant. Lalla Zahra also plays a very important role within the organisation. Many times, she has acted as an informal counselor at Centre Amane. She watches over the children and takes care of some of their most basic needs, while providing support and guidance for some of the workers there. Both women are highly respected and key contributors to the work done at Centre Amane. We have interviewed them to ask their opinions on the women’s group, how it has helped them, and what they think of some of the trips they’ve taken with the group.

According to Lalla Zayna, the women’s group has helped her a lot over the years: “I’ve started to take responsibility and to care more for my children. It has improved my life and kept me out of trouble.” Lalla Zahra mentioned: “I used to work very early in the morning and to leave my children home alone. But when I joined the women’s group, I also started working for the centre. My children also became beneficiaries of the services offered by Centre Amane. Now, before I do anything, I think of the image of Fondation Amane and the consequences that those actions could have on the image of the association.”

On Saturday, November 4th, the women’s group at Centre Amane took a trip to the Saffron Festival. This festival is held annually and only takes place for a few days. It is an opportunity for local cooperatives to exhibit their products and people from all over Morocco travel to see and participate in the harvest.

The trip started around 5:30 in the morning with a two-hour bus ride to the mountain town of Taliouine. They first visited Cooperative IGNARN to assist in the harvesting of the saffron flowers. While in the field, an employee of the cooperative explained to the women the entire process of making saffron.

After some time in the fields pulling the flowers, taking pictures and singing songs, the women headed back up to the field owners’ home for a big breakfast. 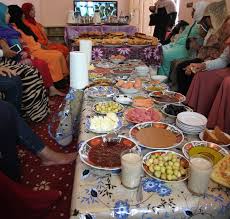 “The woman of the house where we had breakfast behaved very nicely with all the women. She was very welcoming and greeted everyone”, said Lalla Zayna. “It was the first time for some women that they went to someone’s house and were greeted so nicely. We were treated as equal human beings. There was no prejudice against us and no one judged us.” After eating, singing and dancing, the women went into a different building to separate the filaments from the flowers.

Later in the day, the women visited Cooperative ASKAOUN, another cooperative in Taliouine, and saw some of the old tools that people used to use to collect saffron. Following this visit, they headed across the street to Maison du Safran where they learned more about the history of the spice. 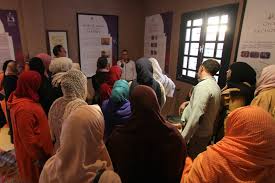 To end the day, the women had dinner at a restaurant just outside of Taliouine. They had bowls of soup for starters followed by a large meatball tajine. Just as everyone was filling up, the fruit platter came out and everyone ate more! When dinner was finished, the women took a walk through Taliouine to see the different shops that were set up for the festival, listened to some music and had some fun shopping before they loaded onto the buses one last time and headed back towards Taroudant.

Thanks to this day, the women not only learned the process of making saffron, but also had the opportunity to learn about the day-to-day challenges of the women who work in these fields part of the year and who are still able to balance home life and work life. 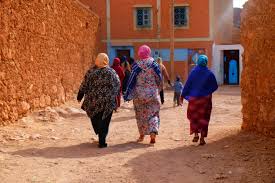 “The women got to see how people behave, how they live”, says Lalla Zahra, “They learned about the ability of the women in Taliouine to organise their day, work, and care for their children.” This trip opened them up to the reality of these women who are in an area where access to social services is very limited. “Despite the fact that the women in Taliouine do not receive any kind of social help, they still choose the right path. It’s easy to choose begging and prostitution, but it doesn’t bring any stability to your life” explains Fatima, the social worker at Centre Amane who organised the trip. “The women of the women’s group got to see the stability that the women in Taliouine have in their lives and how important it is.”

The mothers in the women’s group also had fruitful conversations amongst themselves throughout the day regarding childcare, getting involved in women’s cooperatives, their future life goals, etc. 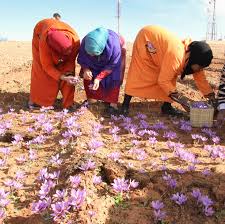 When asked how the women of the women’s group can improve their lives based on what they saw and learned, Lalla Zayna said: “It is possible, but it is hard because of financial problems. In Taliouine, there is more solidarity between the members of the family. Here, many women live alone with their children.”

The women enjoyed this trip and were very happy with its programme and organisation. Lalla Zahra enjoyed collecting the saffron. “It was a perfect trip”, she mentioned. Lalla Zayna, originally from Taliouine, was very happy about the whole trip, but especially when she invited the women into her home. “I wanted to help organise the trip and I wanted the women to discover my village and where I live”, she said. Fatima also mentioned that “the women have already asked to repeat this trip every year.”

Moroccan Children’s Trust and Foundation Amane would like to thank everyone who organised and participated in the trip. We would especially like to thank Rachid Elhiyani from the Belgian Development Agency (CTB) for providing vehicles and food for all the participants.